Ryan Hall is well known for his aggressive guard.

Here is an unfortunately familiar series of events. A beginner starts BJJ. He gets submitted many times when rolling. He eventually gets closed guard and holds it as hard as he can. He doesn’t get passed and submitted. From then on, he pulls closed guard as much as possible. He doesn’t get passed so he thinks he is improving. Time passes. He gets passed when he attempts armbars or triangles, so he only attempts submissions that don’t require him to uncross his ankles. He eventually experiments with other types of guards and quickly gets passed so he returns to the safety of closed guard. The longer this continues, the further behind his guard skills will be. It will be much more (emotionally) difficult for him to develop the rest of his guard game when the time comes.

It is very easy for a beginner to fall into this trap. I was in that trap myself for the first couple of years training BJJ and I’ve seen several of my training partners fall into it as well.

I no longer teach closed guard to beginners. I consider closed guard a more advanced guard that requires good hip movement skills before it can be effective. This has had some interesting outcomes. The students that I delayed showing closed guard to are much more active with their BJJ. They fight harder to achieve the top position, and their submission attempts from guard are more aggressive. 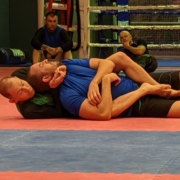 Being a good training partner

How to use progressive resistance in BJJ