As a coach, every action I take either helps or harms the people I train. My actions are guided by this filter, which causes us to do things differently to other gyms.

Most gyms start newcomers with bridge-and-roll and scissor sweeps. Most people at my gym don’t even know what these low-percentage moves are.

The IBJJF has a list of illegal moves that many gyms avoid. We train with these illegal moves because we need to know how to defend them.

We keep what is useful and discard what is not. There is, unfortunately, one very harmful aspect from traditional BJJ training that I haven’t been able to discard. 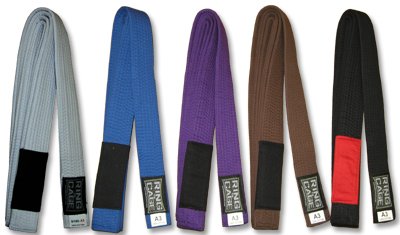 This may seem like a subtle difference, but it is an important one. In most sports you want to improve your skills so you can challenge yourself by competing in tougher competitions. In BJJ, many people just want the next belt, and don’t necessarily want what the belt represents.

Belts create a hierarchy in the gym that can harm the gym culture. You see this is many gyms where higher ranks have special privileges over lower ranks. Lower ranks have to bow to higher ranks, or must stand behind them or can’t even ask them to roll.

In case you were wondering why we circle-up in arbitrary order rather than lining-up in rank order, it is to avoid the idea of hierarchy and special privileges.

Is the Belt System based on merit?

We like to pretend the BJJ belt system is a merit system, but it isn’t. The IBJJF leads the way in this with their black belt grades. Black belt grades are based entirely on time-in-rank and whether you pay your annual registration fees or not. No merit involved.

The coloured ranks aren’t a merit system either. We know this due to how often the word sandbagger is used in BJJ. A sandbagger describes someone who is consistently beating higher ranked opponents, but has not been awarded that rank.

If we ignore belt ranking and say “I compete at blue grade” rather than “I am a blue belt” we wouldn’t have a problem. The only hierarchy in the gym would be the natural competence hierarchy of who is beating whom.

If everyone in the gym competed, again there would be no problem. The coach would rank competitors according to how well they perform in competition (or risk facing embarrassment).

A problem occurs when only some people at the gym compete but everyone expects to progress in rank. The competitors that compete will be ranked appropriately. But how should a coach rank those who don’t compete?

Imagine a part time athlete who trains sporadically but has been training for six years. Many coaches would be tempted to award the next grade to this athlete, even if they don’t have the same ability of the competitors at this grade. Given the prevalence of the claim of sandbagger, there are many coaches who have given in to this temptation and have graded their athletes inconsistently.

The problem of the Belt System

The problem of the BJJ belt system is that it is not merit based, yet we pretend it is. Few coaches have a consistent criteria. Many use arbitrary metrics such as length of time training, whether the athlete pays their fees on time, or whether the coach likes the athlete or not.

How do I get the next belt?

The crux of the matter is that there is no generally agreed upon way of establishing who should hold what belt. My personal criteria is:

If a BJJ athlete were to enter a competition in their age and weight division, at what belt rank should they compete in to best improve their jiu-jitsu?

Note that this mostly, but not entirely, merit based. It’s competition based, so athletes that I grade should expect to be competitive in their competition division.

For these athletes, I have higher expectations for them and treat them is if they were heavier or younger. This means that it takes longer for them to be graded to the next belt.

If you want to know about how to get your next belt, read my criteria then come and talk to me.

Is it a draw or a double loss?

Ever thought about why you love/hate the gi?

What does it take to get the next belt?

Why the IBJJF rules can’t be fixed
2 replies